Damir Sobota (born 1988, Zagreb) graduated from the Academy of Fine Arts in Zagreb, 2013. He has participated in numerous independent and group exhibitions, among which are the 31.salon youth and the 2nd, 3rd and 4th Biennial of Painting. He has been living in a residential program in Belgium and Germany.

Damir has worked as an Associate Professor at the Department of Fine Arts and Graphic Design of the Faculty of Graphic Arts in Zagreb.

He participated in the Scientific-Expert Conference on Estetization and Re-humanization of Public Property, Art as therapy, painting KBC Rebro, Zagreb, 2017.

He is the winner of the Croatian Young Artist Award for 2017.

He is a member of the HDLU and HZSU.

He lives and works in Zagreb.

His art pursues many different topics, but preference is given to the woman and her beauty, in the world of silence and harmony. Milakovic’s work is on the border within realism and hyperrealism. If he works with oil on canvas, on one painting, he works for around months. It is hard to come by to his paintings in the European galleries. The reason is simple. He works on one painting for a long time and after exposure in the gallery, the painting quickly founds a buyer.

Zlatko Milakovic has been living in a very dynamic way. In his youth, he was a top athlete (javelin thrower, champion), later manager of the famous banking group, insurance company, the national association of business managers, etc. By the age of 18, he has moved with his family and has been living in nine different cities in 4 different countries. He has a Master’s Degree in Political Science and has been additionally trained by programs of world-renowned business schools.

Igor Taritaš (1987, Pakrac). He finished primary school in Hercegovac near Garešnica. After finishing School of Applied Arts and Design in Zagreb in 2007, he enrolled in the Academy of Fine Arts in Zagreb. He graduated in the class of professor Ante Rašić in 2013. He has exhibited at fourteen solo and several group exhibitions all over Croatia and abroad. He works as a teacher of Visual Arts in Popovaca and Veliki .

He has been a member of the Croatian Association of Artists since 2012.

“Only thing that matters in art it is itself and public attitude to it!” – O. Orson

Philosophy of O. Orson is simple: it’s all about artwork so he doesn’t want to be labeled with style, school, location, age…

Throughout my work I’m questioning everyday life. Stimuli of the environment are encouraging the creative impulse and the necessity for expression. Creative desire is manifested through creation and expression that may not always be confined to the object (or surface area); it may be behavioral or alive. By expressing myself throughout my work I am discovering something new and I am actually questioning my own level of consciousness.

There are different levels of consciousness and they are often highly subjective views of personal experiences of the individual. I am fascinated by the differences of the factual reality of an object and its human added value that each object is highlighted with. There are numerous differences in the truth of the existence of an object and the way it is subjectively interpreted. These differences are one of my fascinations. Throughout the creative process I am aiming to reach the bare truth of my surroundings and of my own understanding of it in relation to the factual. 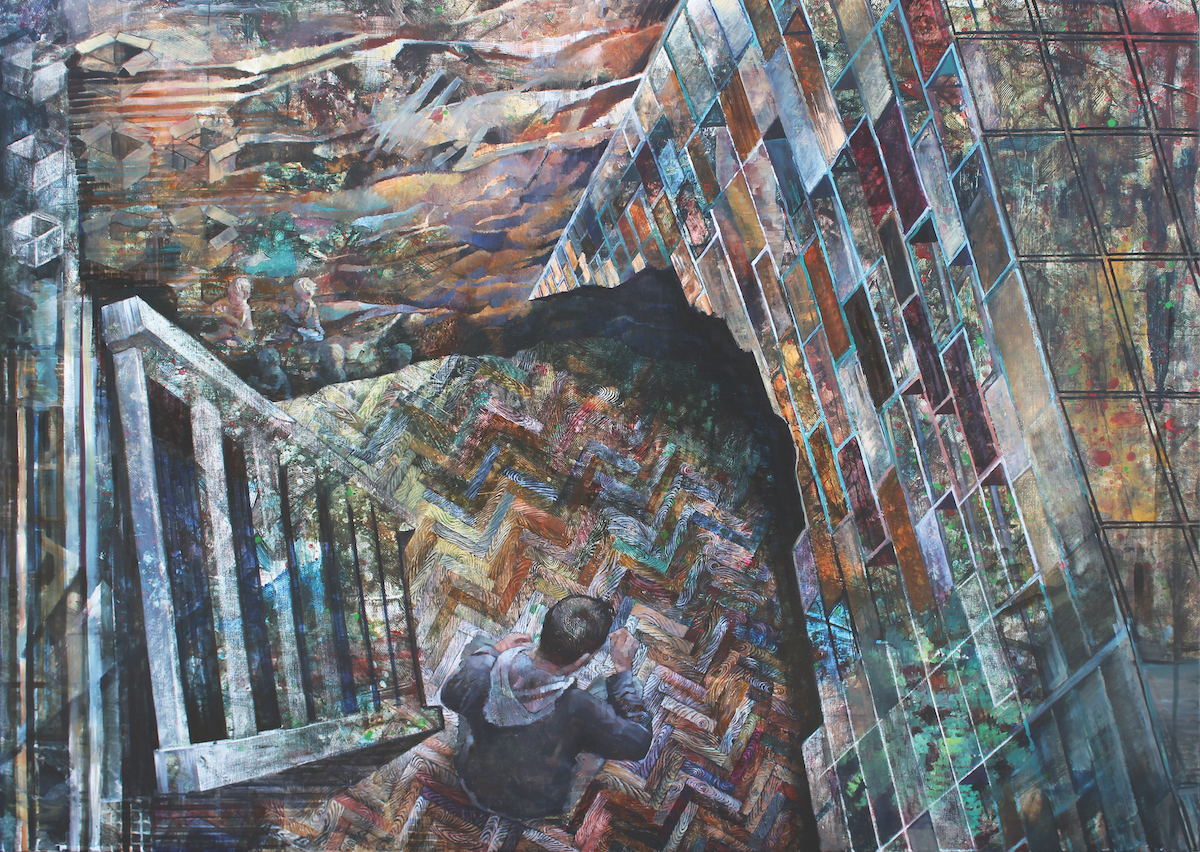 Marina Fernežir was born in Zagreb, Croatia in 1985. She studied at the Academy of Fine Arts, University of Zagreb, at Conservation Department (2003-2008). She has exhibited on several independent and group shows among which we select solo shows “Hommage to the cities of Europe”, at French residency – Embassy of French republic in Zagreb, in 2017, and at Prica Gallery in Samobor, in 2016. Project “Alchemy of dreams” was exhibited in Karas gallery in Karlovac in 2016 and in Karas gallery in Zagreb in 2014. Ms. Fernežir is also a licensed art conservator with over 30 realized projects of research and conservation of wall paintings dating from medieval age to 20 th. Century. Recent project that she led was conservation of wall paintings at ceiling in St. Pelagius church in Novigrad, Istria. She is a member of Croatian Association of Artists – HZSU, HDLU, and member of KRUG, Croatian association of business women. She lives in Zagreb, and works in Croatia.

Ana Guberina, Master of Fine Arts (MFA), lives and works in Zagreb. She received a master’s degree from the Arthouse College of Visual Arts in Ljubljana. She has made several study visits to Hamburg; Los Angeles (UCLA) and Paris (La Cité internationale des arts). Her works were exhibited from 1996. until today in several major cycles: ‘Summer on the Island’, ‘Motions and Structures’, ‘Adam and Eve’, ‘Coherence’ as well as the cycle of religious paintings ‘Your Face O Lord, I seek’.

Ana Guberina exhibited her works on forty solo exhibitions and over hundred group exhibitions. She took part in numerous arts projects in Croatia and abroad. For her work she received many acknowledgements and awards. Her works can be found contemporary art galleries and private collections around the world. She is a member of HDLU /Croatian Association of The Visual Artist/ and CIVA /Christians in the Visual Arts/ and HULULK /Croatian Association of Visual Artist and Arts Critics

Marija Galić, graduated painting in Ljubljana (Republic of Slovenia) in the class of Prof. Mladen Jernejc. She has prepared 19. independent exhibitions in the Republic of Croatia and Slovenia so far.
Marija has participated in numerous collective exhibitions. She is the recipient of Dean’s acknowledgment. She has participated in several international art projects and art colonies. She lives and works in Zagreb as a freelance artist.

Students from Rijeka and Zagreb Academy of Arts

Lorena Almaši was born in 1994. in Zagreb. Student of 4th year BA, Graphic Arts department in the class of Robert Šimrak at the Academy of Fine Arts. Lives and works in Zagreb.

Exhibitions and other activities: through education, Lorena participated in group exhibitions organized by school and academy and in other initiatives. She also won two awards.

Monika Milas born in 1997. in Zagreb
third-year student of The Academy of Fine Arts at graphic department in Zagreb.

My work is characterized by detailed brushstrokes and the use of black ink on large scale formats, usually on 200g Fabriano paper. With a very minimalistic approach  i’m creating abstract forms with a constant flow of energy .

Drawings are often oozing with emotion that is up for the visitor to experience in their own unique way.

In the year 2010, I’ve started my middle school education in School for Applied Art and Design in Osijek, Croatia. I’ve graduated in the year 2014 and have gained vocation of painting designer. In the same year, I began my faculty education at the Academy of Applied Arts at the Rijeka University and in the year 2017, I got my Bachelor of Arts degree.

At this moment I am in my second year of master degree studies at the Academy of Applied Arts in Rijeka.

Exhibitions and other activities: through education, I’ve participated in group exhibitions organized by school and academy and in other initiatives.

Exhibitions and other activities: Through education, I’ve participated in group exhibitions organized by school and academy and in other initiatives.

Exhibitions and other activities: Through education, I’ve participated in group exhibitions organized by school and academy and in own initiatives.

Next artists announcement in April

Suggest an artist or apply for the exhibit!

Are you an artist? Or you know some great artist who would love to exhibit at the Vrsar Art Fest?

We invite all interested artists to apply to be one of the selected artists to exhibit at the Vrsar Art Fest 2019. Our goal is to provide the public and our selected exhibitors an experience of unique quality. We host artists from around the world, submit an application today. Artists retain all revenue from the sale of their work with no commission on sales due to the Vrsar Art Fest.

Do you need info or you have any suggestion? Contact us!